The Round Cambridge - Meetings and Events 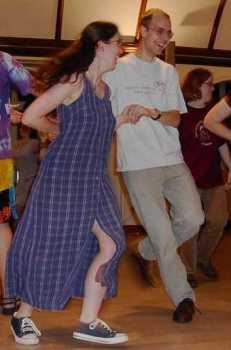 A weekly meeting in full swing

The Round meets every Thursday during full term between 8 pm and 10pm in Wesley Church Hall, Cambridge, England (by the Jesus Lane Roundabout on King Street), after which we will often retire to the pub.

Visitors and those with no University affiliation are very welcome to come along. No experience is necessary — all dances are walked through and explained, though student-level fitness and ability to pick things up tends to be assumed. You don’t need to bring a partner — other people there will be ready to dance with you.

We dance to live music at some weekly meetings; for others we use recorded music. The last meeting of the term is a party, when we normally have a live band, and people bring finger food for the break in the middle.

Your first two visits to the weekly Round are free, and you get a free session whenever you bring a friend who hasn’t been before. Otherwise the following charges apply (as of 2016-17):

NEW for 2019-20! Ceilidh++ is a new venture for students and other young people who want to explore folk-dancing of any kind. At each meeting we will learn dances in the folk styles that interest us, as well as dancing again the ones we liked last time. Last term it was ceilidh dances, contra, clog, Bal-folk and Scandi. This term people have so far asked for more clog, more bal-folk and some Playford.

There will usually be live music, from a band led by experienced folk-dance musicians. Aspiring musicians are welcome to play with the band, and a music workshop is a possibility. If you enjoy both music and dance, you can switch between the dance floor and the band from dance to dance.

The format may change. Members of the group will decide for themselves how it will evolve, but we hope it will provide a centre for anyone who enjoys any kind of folk dancing.

Come along to the Wesley Church Hall, King Street on Tuesdays, 8.00–10.15 p.m., starting on 21st January. Only £2.50 per session. You don’t need to come with a partner, or to have previous experience of any kind of dancing — an urge to move in time with lively music is all you need.

The Round organises ceilidhs, normally twice a term on Fridays or Saturdays. They’re always popular. Sometimes we dance to local talent, and sometimes we bring in top outside bands. We provide a caller to explain all the dances, and some of our callers are now in high demand on the national English ceilidh scene!

Most of the ceilidhs are at Emmanuel URC which is opposite Pembroke College, on Trumpington Street. The exception is the May week ceilidh, which is held in Emmanuel College Old Library.

At the end of the Easter Term, the Round holds its Playford Ball, and invites past and present members of the Round to attend. It is a more formal event than our regular meetings, with a visiting band. The dances are mostly from the Playford era — late 17th and early 18th century — but with a few modern dances in a similar style.

On the Sunday following the annual Playford Ball there is usually a punt party to Granchester Meadows. Details will be announced nearer the day.

From time to time the Round holds a Jane Austen evening, when we meet for Formal Hall dinner at Emmanuel College and a dance afterwards in Emmanuel’s Old Library. Jane Austen loved dancing, although she only ever mentioned one dance by name in her novels.

We aim to do a programme of dances from the late 18th and early 19th century that she might have danced herself. They are not for the most part the dances that you may have seen in the films and TV series, which are usually dances from 100 years or more earlier, and would have been quite out of fashion by her time.

Meetings don’t stop in the summer just because term is over — weekly meetings continue on a more informal basis from 8 p.m. to 10 p.m. as usual. Since it is out of term it is not organised by the regular student committee — watch soc-round-chat for details. Places where it might happen include: